We arrived early to the campground since we got off the ferry so quickly. They told us the people weren’t off the site yet but we could go park the motorhome in a spot near our site. When we got unhitched and parked Mom saw the campground host, who just happened to be at our site, and wandered over to say hello. She jokingly asked how long until he people would be off so we could plan our day. Well, they thought they left the next day! OOPS! After working out some bumps with the front office we were able to swap to another site. It is #30 on top of a hill with a spectacular view. Â The space was HUGE as well. 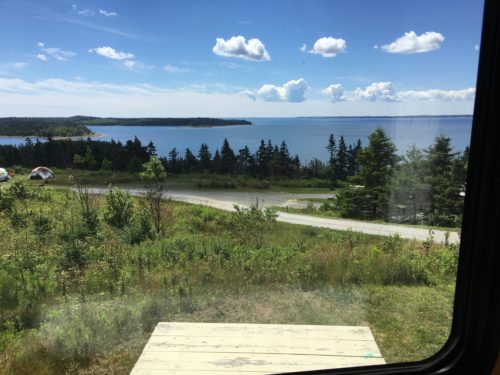 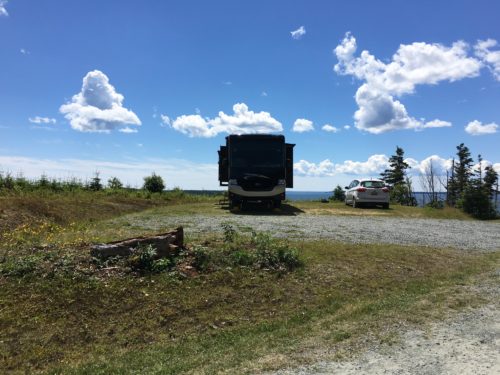 The campground was overbooked and they worked to accommodate a lot of extra people. There were campers tucked in every available space they could wedge them in. Some tents were even pitched near the dump station! 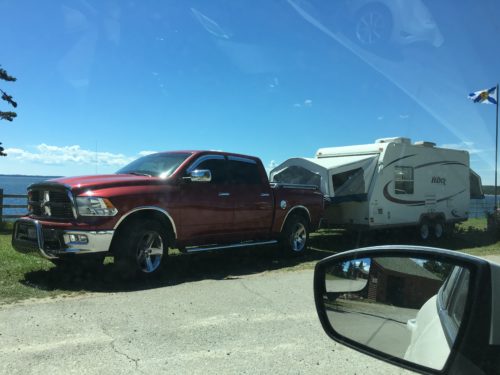 More trailers parked and set up in the day use area outside the gate. There were several sites that had multiple RVs in them! It was crazy how packed it was yet we managed to score this epic hill spot. 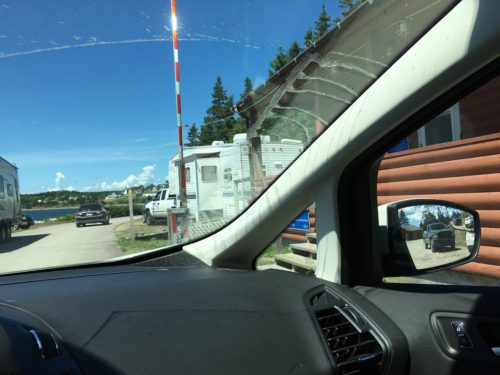 We drove by #14 later and were really glad things worked out the way they did. The site was unlevel, small and no view. 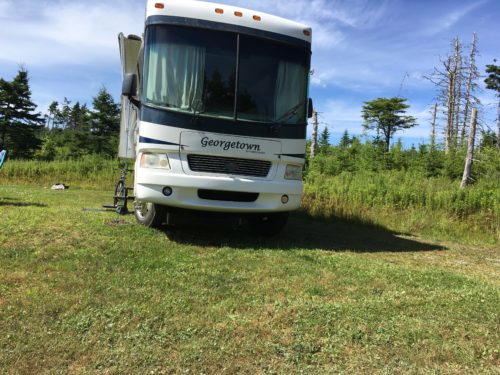 We drive 1.5km to St. Peters Canal NP. We learned we could have walked and crossed the lock gates on foot! The canal was full of jelly fish and other fish. You are allowed to jump off the walls and swim in the locks. There were several people in the water up closed to the ocean side. 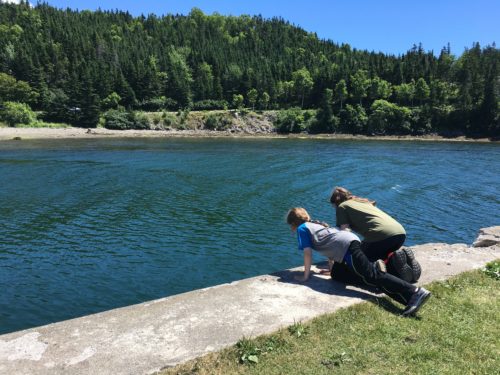 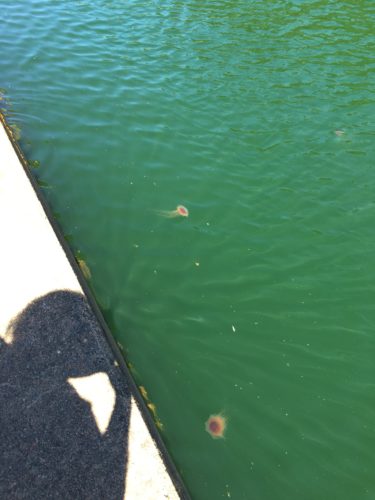 We walked along the canal and waited for a boat to come in. 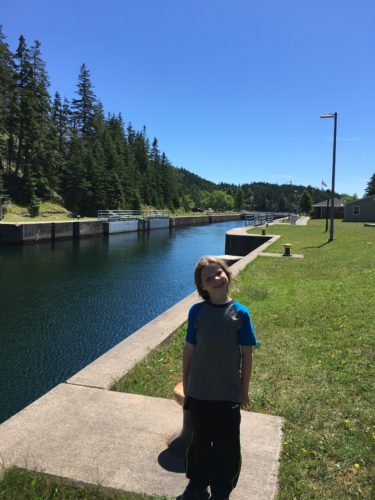 Soon we spotted a sailboat and watched it come through the swing bridge. 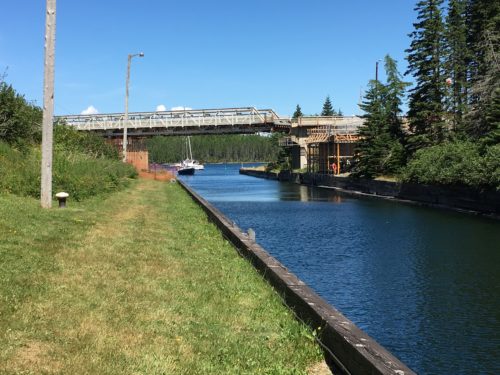 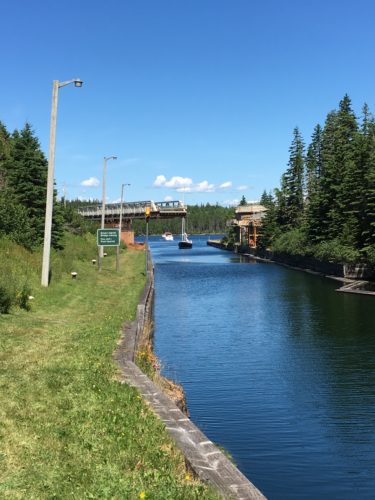 Soon it was chugging down the canal. 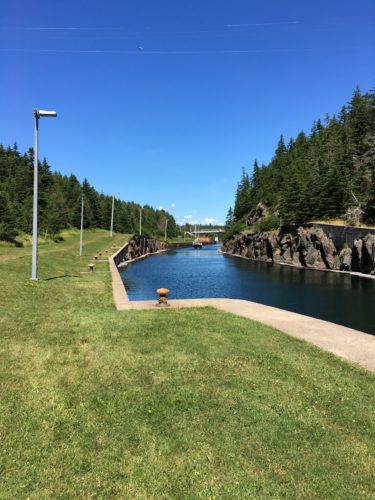 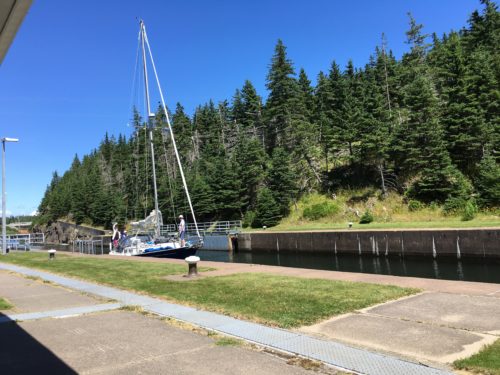 The back lock gates closed and less than 2 minutes later it sailed out the now open front lock gates. It was a neat process to watch the boat slowly lower about 2.5 feet to pass into the lake. 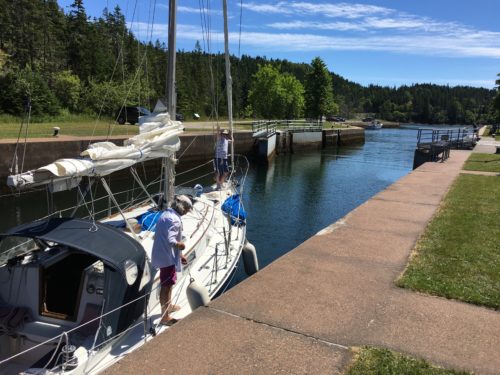 We had a campfire at our site, first in over a month! We ate S’mores and enjoyed the downtime. After our fire went out we walked down to a fun singing event at the campground hosts area at the teepee. About 30 people showed up to sing along with an Elvis impersonator! It was a fun evening. 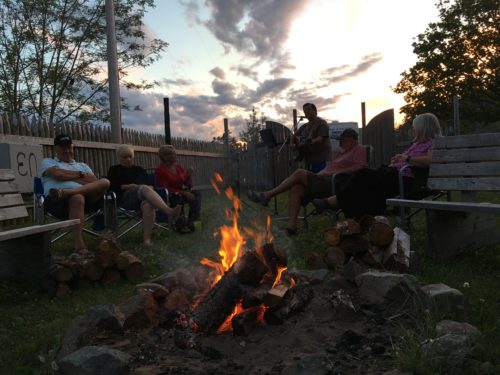 We headed back for showers. Mom went one way and B and I went to the boys room. We goofed around int he shower and used up all the hot water. I hadn’t rinsed off when the water went icy! Mom could hear me screaming I was freezing but could do nothing but shout in the door to just rinse quickly. No dice! I screamed, B yelled. It was ugly. We do have ugly moments. Mom called B out and had him verify the bathroom had no more men in it and then had him stand guard while she quickly ran in to force me into the cold to rinse super quick. She toweled me off and helped me dress quickly and then we left the bathroom like NOTHING had ever happened. Oh the drama before bed.