We attended another Miâ€™Kmaq program with Mrs. Marilyn and learned about the animal hides and why certain animals were sacred to the Miâ€™Kmaq.

At the end of the program we made a second friendship necklace with a turtle charm meaning truth!

We packed up the motorhome and headed out early from he campground after we discovered the drive was a bit longer than we thought to our next camping location.

We drove towards the Gaspe Peninsula. We stopped at Battle of the Restigouche NHS. We learned about the battle that took place in the harbor between the British and the French. The French, rather than surrender their ships and cargo, sank their ships in the harbor.

The museum has many artifacts recovered from he largest of the three ships, the Machault, that was sank over 200 years ago.

The ship was impressive in size, a 26 gun military vessel.

We saw the anchor. 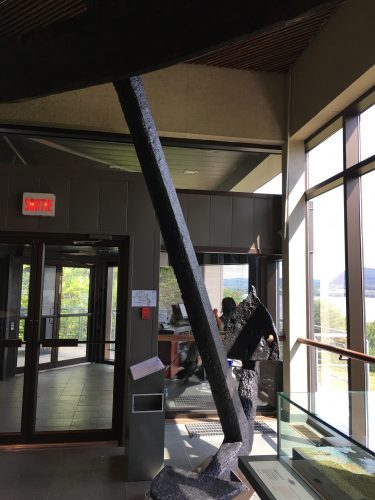 A model of the ship. 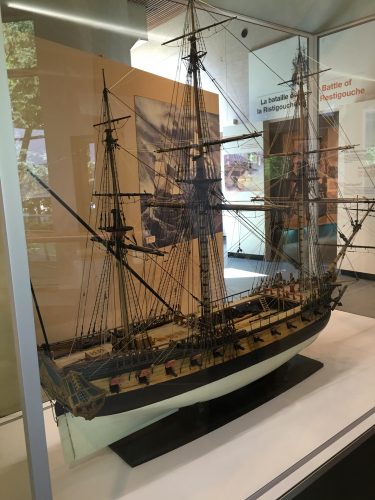 They reconstructed what the holds would have looked like. 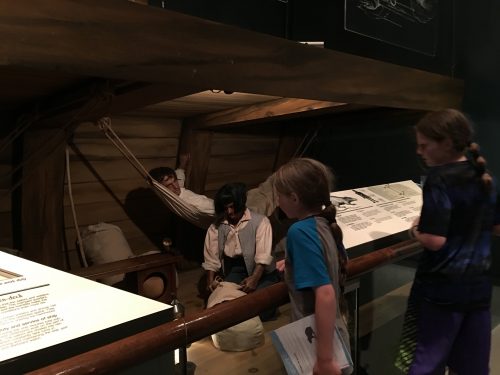 Here is a section of the ship that was recovered. You can see Dad for scale. 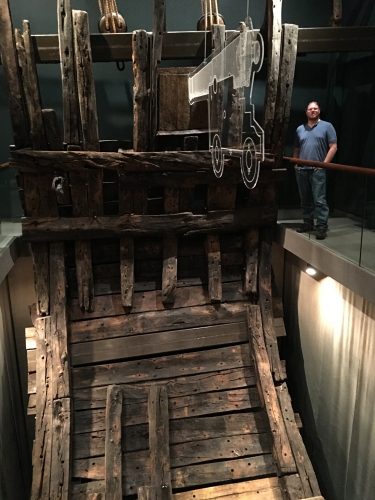 Outside they had a model of the deck and we got to ring bells, fire cannons and help navigate the ship. 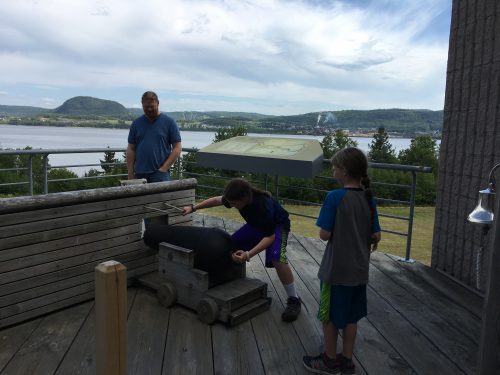 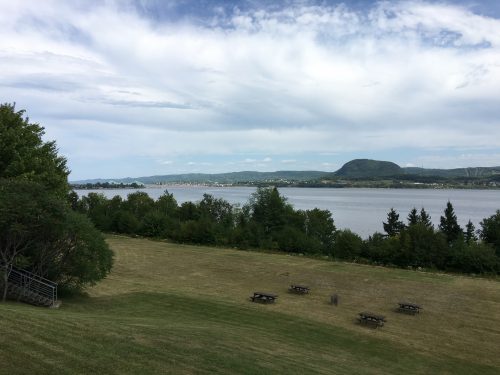 We drove up the road more to Miguasha Park. Miquasha Park because a UNESCO site in 1999 because it is considered the worldâ€™s most representative paleontological site of the Devonian Period (fishes).

So thinking back on our journey we visited Joggins Fossil Cliffs which represented the time right after the Devonian period. We also visited the Gros Morne site which was Odivician. So we have seen lots of UNESCO sites for paleontology.

We enjoyed exploring the fossils from the time period. There were some impressive fish back then! 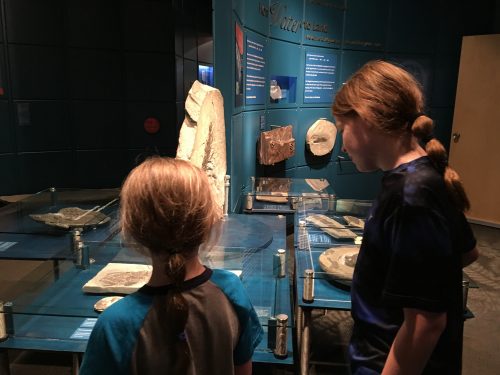 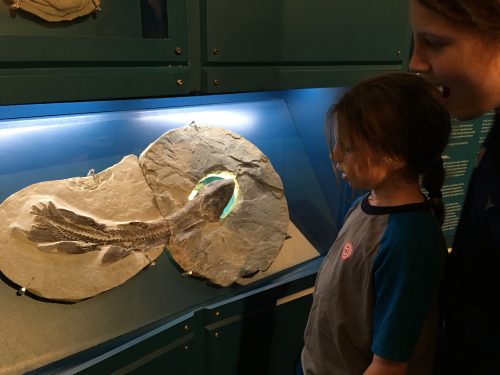 There was even a cast of a skull and thorax of a Dunkleosteus terrell. It was one of the largest predators int he Devonian oceans and swam in the warm waters of what is now Cleveland, Ohio! 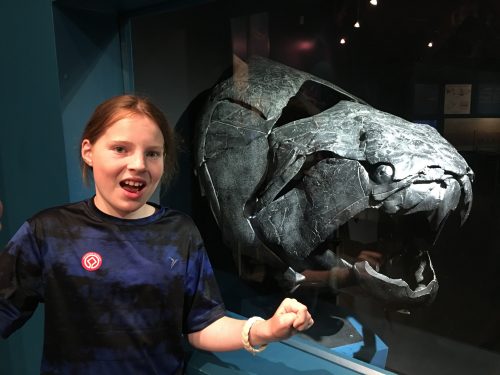 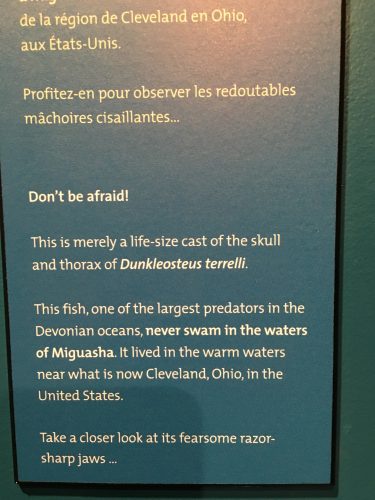 We explored the cliff facings of the site and watched some paleontologists at work. 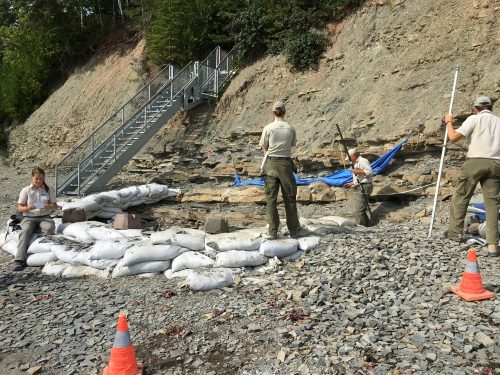 We looked through some of the layers and all over the beach. 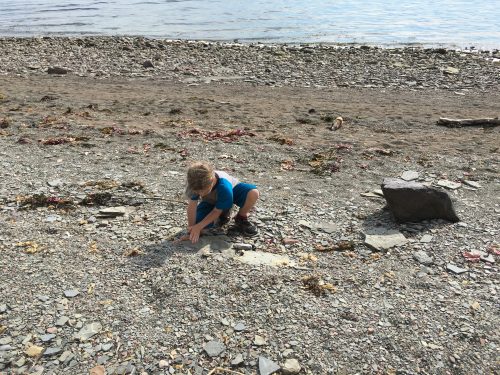 Emmerson did find a fossil but it would have been older than 380 millions years. He turned it over to the staff who were excited to add it to the collections. 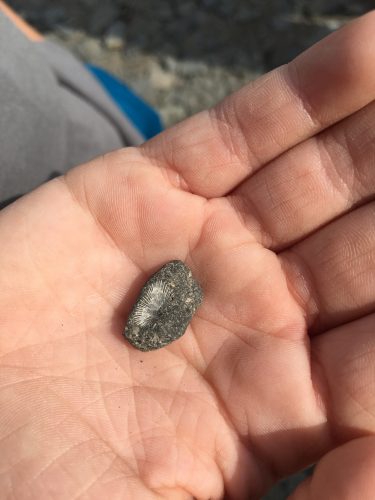 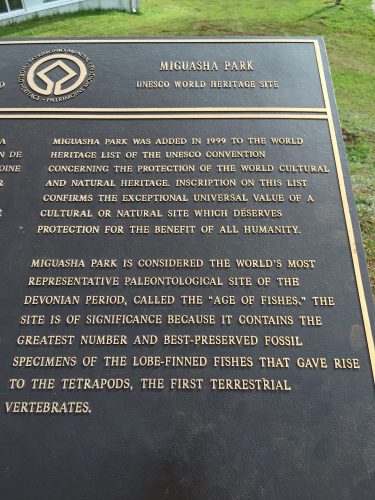 We continued on the road until Dad was tired of driving. We foundÂ  cute little campground on the water in Paspebiac, Quebec. We went out for pizza and played at a cool playground near the campground. Mom got some laundry done too! Yay, clean socks! haha.