We first hiked out the Hickory Nut Falls Trail. There were a LOT of stairs but we managed. In fact I did all but about 30 of them. Considering there were over 200 I was pleased, as were Mommy and Daddy who didn’t have to carry me those extra stairs. 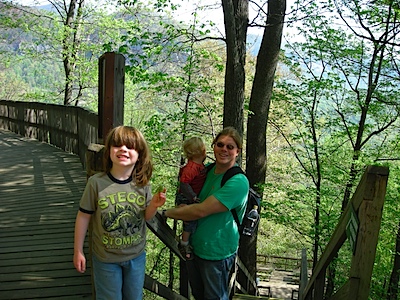 I liked climbing the big rock with big brother. We built a rock sculpture on top of the rock. 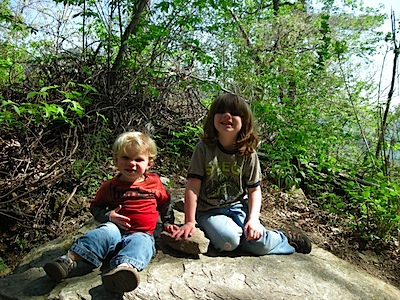 I even walked today. The rule was I HAD to be holding a hand because just a few feet away way a HUGE drop off. 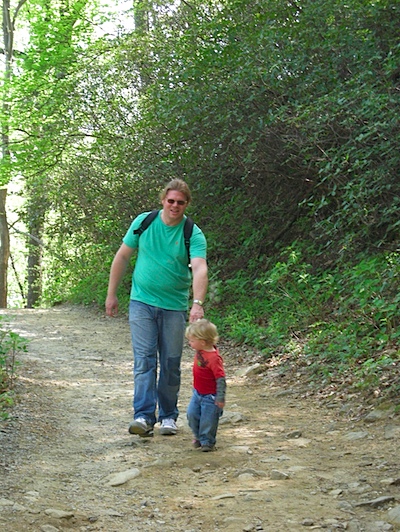 We climbed up a few more rocks for pictures. 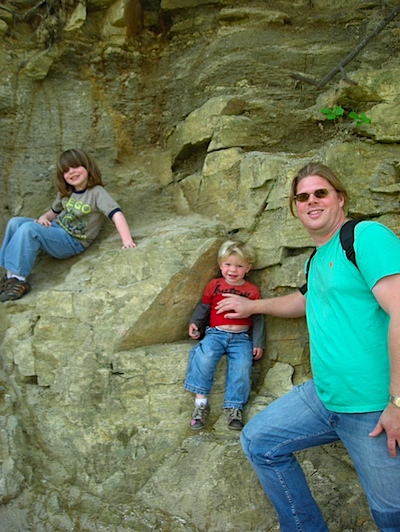 Almost there. I am giving up and Daddy will now have to carry me! 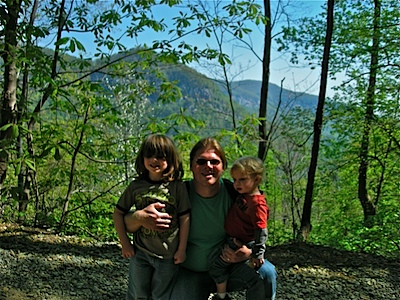 ThE FALLS! There it is! 404 feet of falling water! 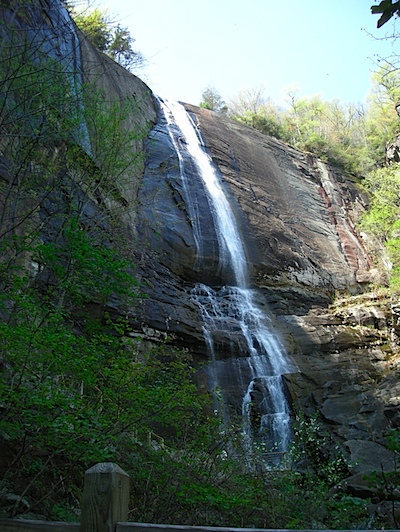 The water pouring over today was kind of slow but in peak season it is huge. 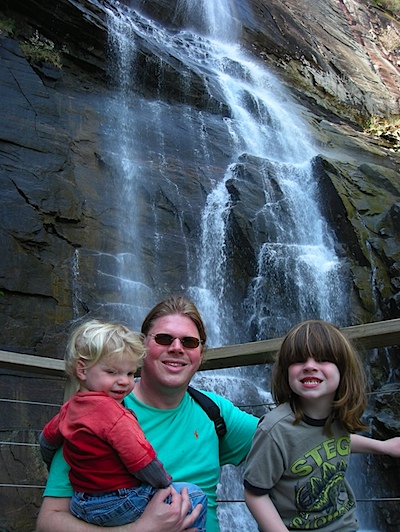 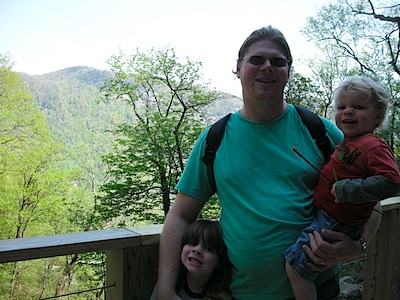 I found a stick and little puddle to play in at the top. In fact I found lots of sticks (rocks, twigs, leaves, flowers, bugs and dirt) and lots of puddles in which to play. There were lots of places wehre the water was seemingly bubbling between the rocks. It was really neat. 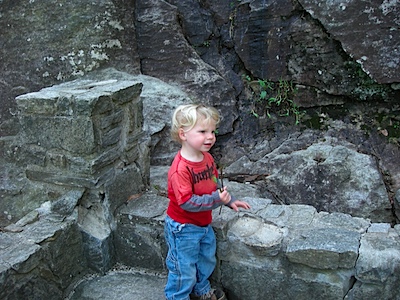 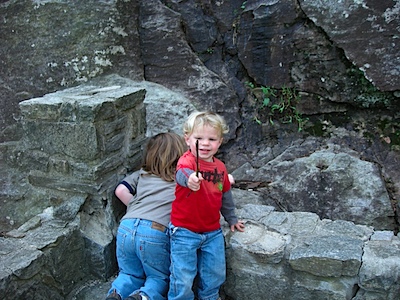 On the way down I wanted to gallop the whole way, even over steps and down steep hills. I finally gave up and opted for walking backwards. Daddy obliged since I was at least walking and not needing carried. 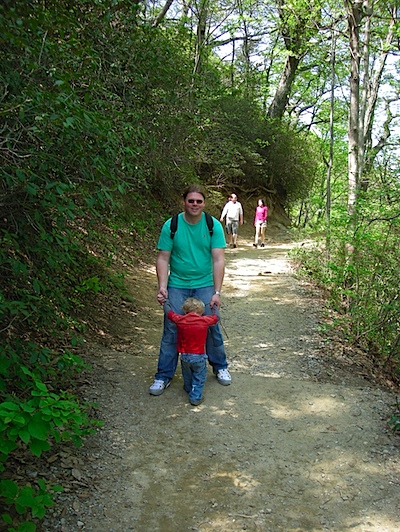 When we got back to the beginning we took an elevator up 26 stories to the almost top of the chimney. First we had to walk through a really neat tunnel. 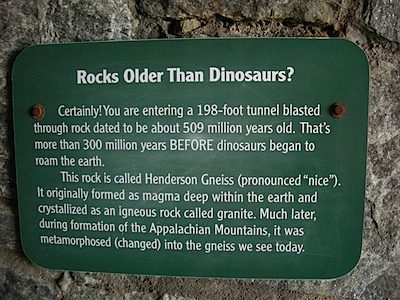 At the top with a nervous Daddy and Mommy. We were both full of energy and wanting to walk around without holding hands. 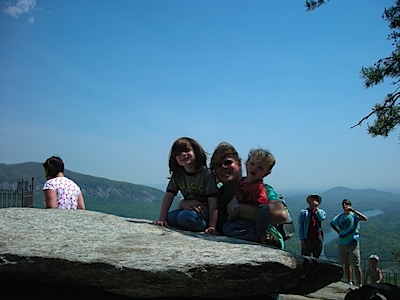 At the top of the mountain (well almost top) there is a gift shop and we each got to pick out something unique. We picked mining helmets! 🙂 Aren’t they the coolest! 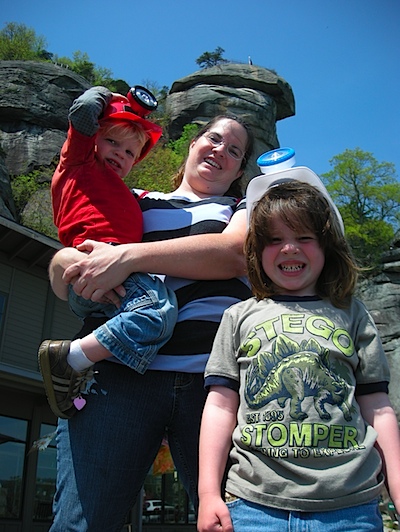 After the BIG hike we took a smaller one that was a bit less than a mile through the “Great Woodlands Adventure”. We learned all about the animals in the mountains. The salamanders seemed pretty cool. 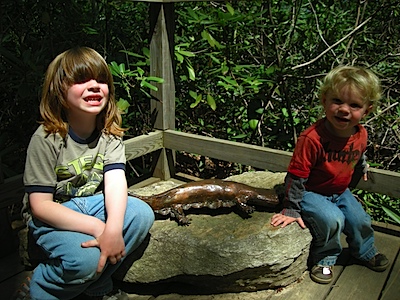 I liked playing the turtles like drums until a REAL salamander nearly ran across my foot. Too bad Breighton missed it, he has been looking for one for several days now. 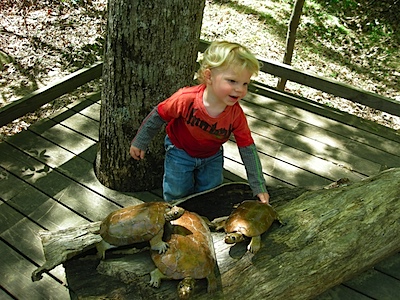 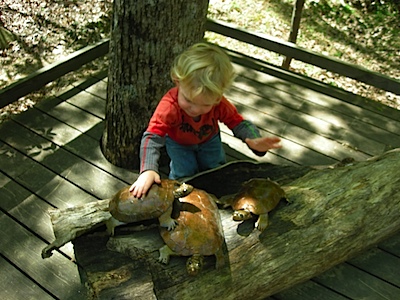 There was a giant frog! 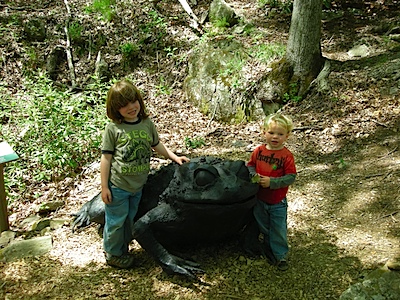 I posed for a picture with a nut. I know it is hard to tell which one is me and which one is the nut! I am wearing a red-orange shirt! 🙂 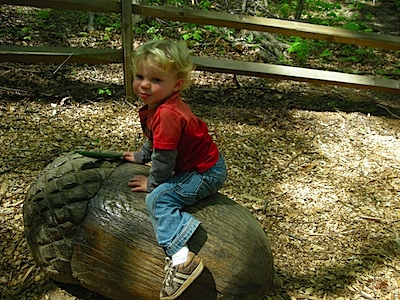 What a fun day out. I took a short nap in the car and was ready to do more. We ate a nice dinner, visited a toy store and stopped by the playground on the way home.

Off to bed now!