All I can say is WOW! What a super fun day! I want to live int he Magic House!

We were waiting in line and suddenly a hawk attacked a pigeon and it came crashing down on to the porch we were standing on. The pigeon scrambled to get away and it flew right between Mommy’s legs and then under a railing. The hawk was in hot pursuit but lost sight of the pigeon because of all the people. The hawk retreated to a tree and was vigilantly looking for the pigeon. A few minutes later (after the crowd dispersed) Mommy and I were still watching and the hawk dove down and got the pigeon (pigeon was injured and hiding in the bushes). It was pretty cool to watch it all but a bit sad that the pigeon died. 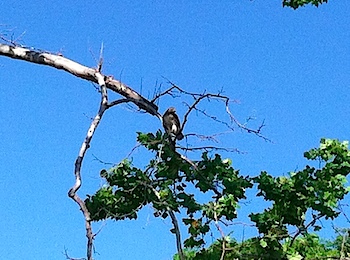 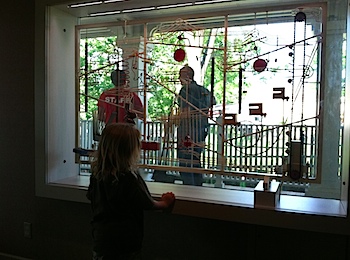 I hung out in the art lab for a hour painting, making paper creations and playing with playdoh. 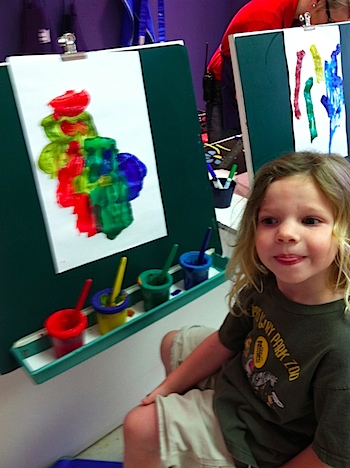 They had a fishing pond and once you caught your fish you had to release it up stream. You could walk along and follow your fish back to the pond. 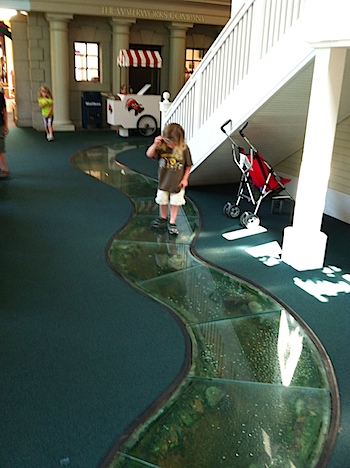 I think I fished about 20 fish out of the pond. 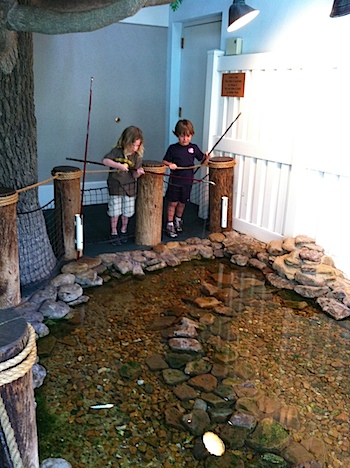 I had to check all the dogs and cats at the vet clinic. 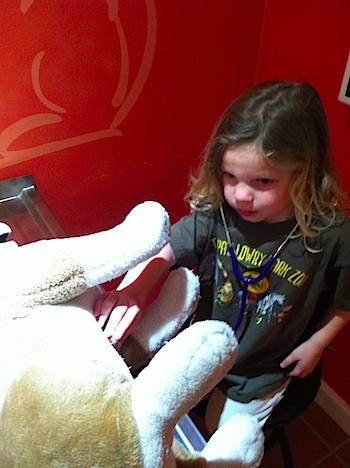 Mom thinks this is the best idea ever for zhu-zhu pets! 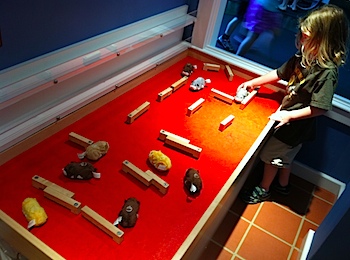 They had a fun water table for kids 6 and under. I spent most of my time engineering a lock system with little red boards where I could float the boats at different levels based on where the water was. There were also hand pumps that none of the kids and only a small amount of adults could figure out. I walked up and just started pumping. Smark kid! 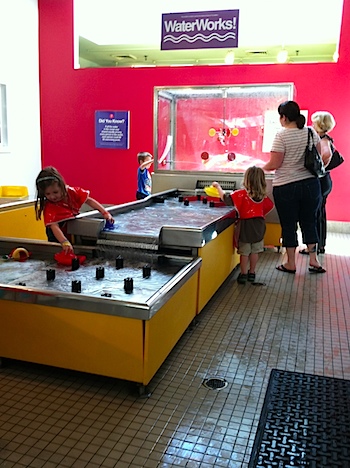 They really had a lot of cool stuff to play with that really grabbed my attention. 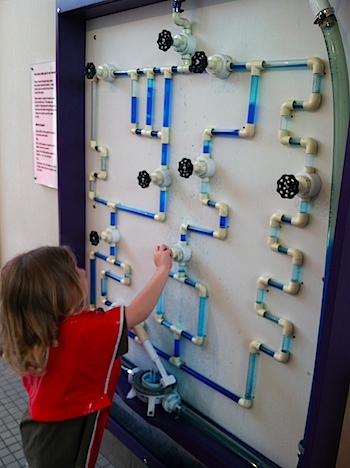 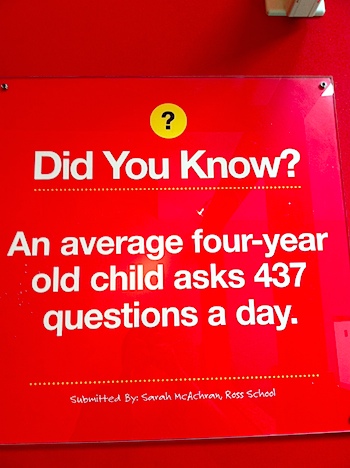 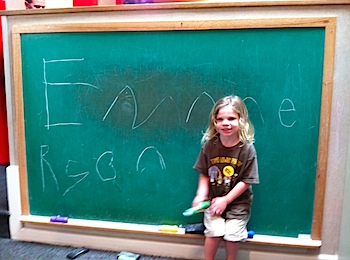 So Big found a SO LITTLE place to look. I loved looking in the little door. There was a toy mouse family having a party. 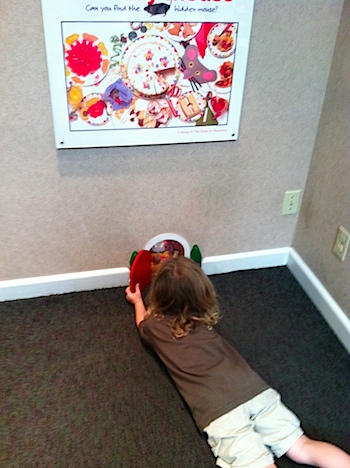 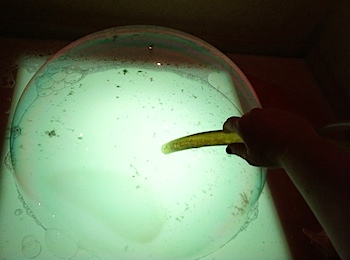 Mommy took off my shoes so I could play in the sandbox outside. Within a minute I was laying down in the kiddie river. They had boats you could pull around and toy ducks that floated along. I opted to float with them. After I went in a few other kids followed and were wet but not as soaked as I was. 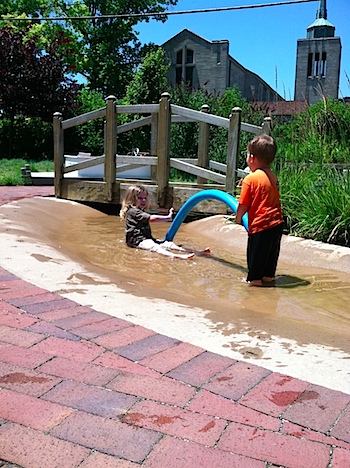 Lounging in the river. Mommy said I am a river rat! 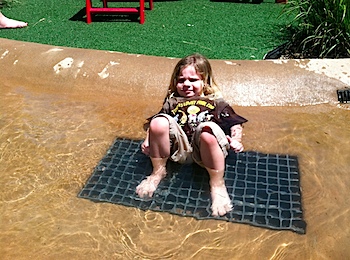 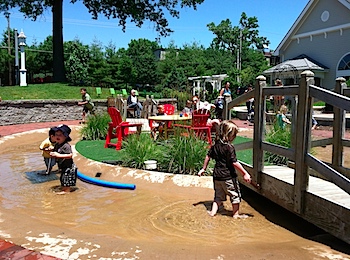 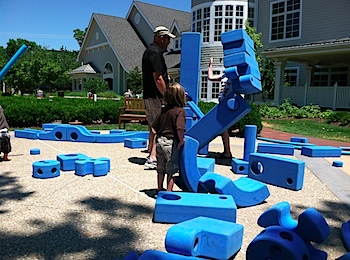 I was soaked after the water incident but by the time I finished playing with these mutant blocks outside I was bone dry! I SO want these blocks!!! 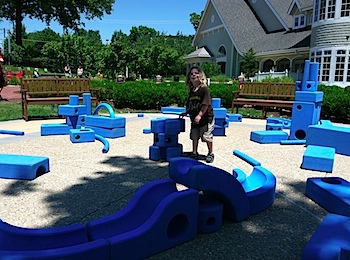 Checking out the Magic Tree House exhibit. I like the medical wagon because you could make the seat bounce up and down. 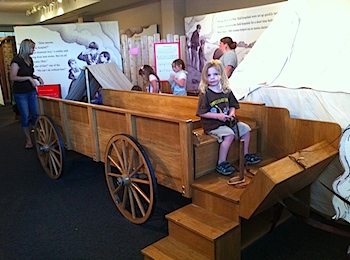 Another favorite from today. You could launch yarn balls and scarves through the windy tubes. I laughed so hard! 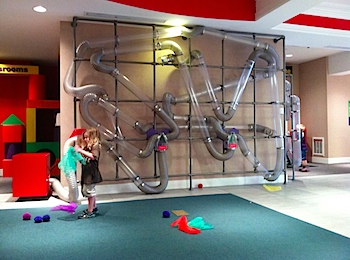 Hanging in the kids construction zone was fun. I replumbed the bathroom. 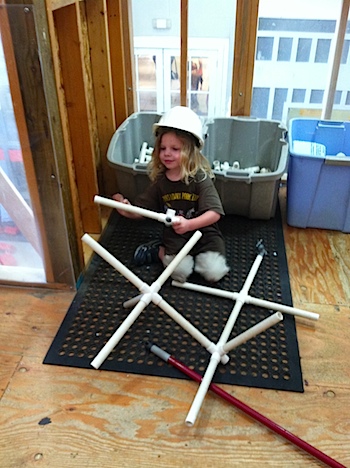 I hired a few people to help me haul bricks up and down the pulley system. 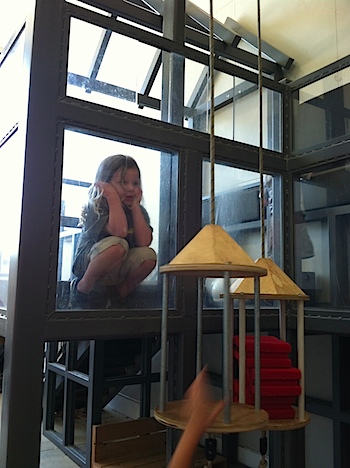 I helped build magnetic sculptures. I was sitting like this when suddenly I was on the ground. A little kid came up and apparently wanted to sit down so he just pulled my chair out from under me. I am okay but I was shocked and decided it was time to go! 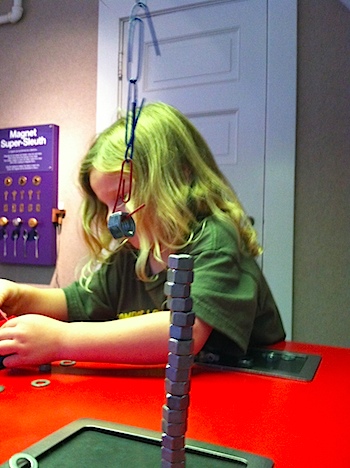 I got to make my hair stand on end! 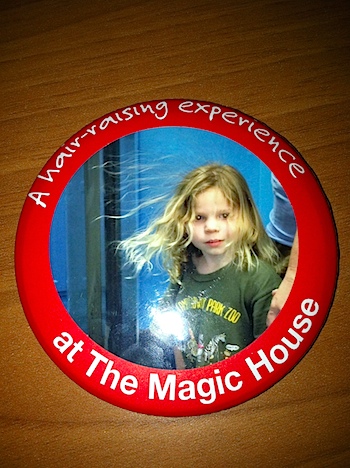 At the end we hung out on their “Sandcastle Beach” and played in the sand until I got too hot and hungry and wanted to go home. 8 hours at the museum was long enough! 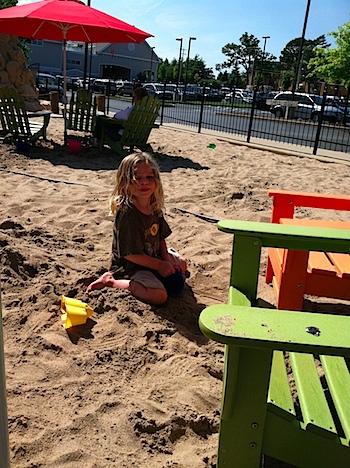